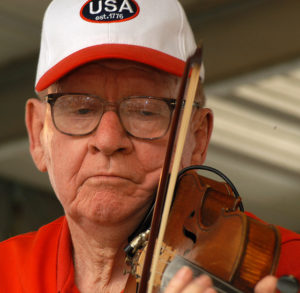 Adam Hebert was born near Church Point, Louisiana on August 23, 1923 and grew up amidst traditional Cajun and country music. At the age of four he was dancing for tips and by the fourth grade was singing Jimmie Rodgers songs for his fellow classmates. After realizing he had a talent to share, Adam built his first fiddle out of an old chocolate box and screen wire. His bow was strung with horsehair from the tail of the family mare.

By thirteen he had abandoned his homemade instrument for a Montgomery Ward fiddle and began playing with accordion player Felton Carriere. They played house dances and introduced the accordion to local dance halls. After a stint in the army Adam continued to play with various bands and made appearances in clubs and radio stations throughout Louisiana.

In the 1950s, he formed Adam Hebert and The Country Playboys and recorded for Swallow Records from 1959-1973.

His hit title “La Valse de Ma Cherie” was used in the soundtrack of the 1975 Charles Bronson movie, “Hard Times.”

Mr. Hebert passed away October 11, 2010, after being in failing health for a number of years, but his music will live on forever. With a timeless repertoire including hits such as “Madeleine,” “La pointe aux pins,” “Le moulin,” “Cette la moi j’aime est comme un ‘tit oiseau,” and many, many more, his songs have been – and will continue to be – played by nearly every other Cajun band out there.

The music in this collection represents the classic Cajun dance hall style of the 1950s and ’60s with country and early rock ‘n’ roll influences. This generous offering of 27 tunes features instrumentation as welcome on the stage of the Grand Ole Opry as in any dance hall in Lafayette on a Saturday night. Cajun fiddle and accordion coexist happily alongside the steel and electric guitar, bass and drums. And, oh my, the rhythm is infectious! Hank Sr. must have had a profound influence on Adam and the Playboys.

The quality of the remastering varies widely as it sounds like most of the selections were simply taken directly from classic 45s that were recorded in empty dance halls but the quality and enthusiasm of the performances shine through for generations to come.