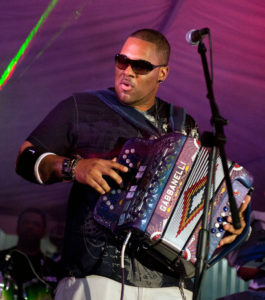 Chris Ardoin, the next generation of many Ardoin musicians, has his own unique sound that has dancers and music lovers craving him, packing Southwest Louisiana and Southeast Texas clubs, churches, dance halls, trailrides, and festivals. He blends the traditional Creole music with r&b, rock, jazz, blues, country, and gospel. Chris was born and raised in Lake Charles, Louisiana where he still resides today. He started playing the accordion at the young age of four and by the age of nine he had already played Carnegie Hall in New York.  And by fourteen he had performed for over 500,000 people at the Monument in Washington D.C. Chris Ardoin and NuStep has traveled and entertained millions of people over the years not just in the crawfish circuit but also in far away places such as London, Sweden, Amsterdam, Jamaica, Mexico and even Japan.

After making special guest appearances for a few years with Lawrence Ardoin, his father, Chris and brother Sean formed their own band, Chris Ardoin and Double Clutchin’, with Lawrence’s help. The band quickly gained a huge fan base with their infectious, energetic music.

In 1999, a long overdue talk on plans for what direction the band would be going in between Chris, Sean, and father Lawrence led to a breakup. Chris, at the time a senior at Washington-Marion Magnet High School, had his own vision on what he wanted to do. Music was not the only thing Chris ever wanted to do. Sports was a big part of his life. Juggling between music and sports was the easiest thing and deciding which one will to continue after high school. Sean went on to start Sean Ardoin ‘n ZydeKool and Chris kept on trucking with Double Clutchin’.

In 2004, Chris wanted to start over so to speak. Start from scratch and really set his self apart from the Double Clutchin’ name and do what he wanted the way he wanted to do it, Chris then headed to his studio to start the recording of “Sweat” and changed the name of the band to Chris Ardoin and NuStep. Since changing the name and creating a brand new sound, the band is at the top of its game. Chris says, “Music has given me more than one can imagine from awards, movies, traveling the world, and most of all giving audiences everywhere the joy of Zydeco music.

In 2014, with the release of BACK HOME, Chris has the world paying attention. The week of it’s release, the album was No. 1 on the iTunes Best-Selling World music chart and No. 1 on Amazon’s Best-Selling Blues chart. It was also No. 20 on Google Play’s Top Albums chart, which includes all genres of music. That ranking put Ardoin in the company of Bruno Mars, Jason Aldean and other mainstream stars.

Chris Ardoin is a history maker again. In March, 2013, Ardoin released his “Back Home” CD on Maison de Soul Records of Ville Platte.

The CD landed at No. 1 on the iTunes Best-Selling World music chart and No. 1 on Amazon’s Best-Selling Blues Chart. The disc was the first zydeco or Cajun record to do so.

Earlier this month, Ardoin had an iTunes repeat. His new CD, “Zydeko Fever,” debuted at No. 1 on the iTunes Top 100 World Music Albums chart.

After his second-straight No. 1 CD, Ardoin celebrated with fans on social media.

“APPRECIATIVE & BLESSED!!!,” Ardoin wrote Oct. 1 on Facebook. “Album don’t drop for another 3hrs & u guys & gals have helped me reach #1 for the second album in a row! Had never been before in the history of zydeco/cajun until Back Home was released & even if it’s changed by morning, it still happened again!!!! #WeBelieve”

As of last week, “Zydeko Fever” was still in the top 10 at No. 5, ahead of discs by global performers such as Celtic Woman, the late Hawaiian music icon Israel Kamakawiwo’ole and a Disney collection called “Relaxing Piano – BEST.”

Congrats to Ardoin on this major feat for Louisiana music. His second-straight chart buster treats the world to 17 original songs of zydeco with R&B and hip hop flavors. The songs include a live version of “Breathe,” a selection, which a few lyrics borrowed from the Temptations “I Wish It Would Rain,” from his “MVP” CD of 2007.

Ardoin flexed his musical muscle on “Fever” with all songs written, arranged, produced, recorded, mixed and mastered by him at his own studio, Soul Rehab Music. He played accordion, bass, guitar, drums, rubboard and keyboards, along with lead and background vocals, on all songs. Desmond Joseph also helped out on bass. Abraham Oyelowo also played keys.

Ardoin’s history-making CD continues a music heritage that few families can match — regardless of genre. An Ardoin has been recording Creole music and zydeco for close to 90 years.

In the 1920 and ‘30s, Amede’ Ardoin, a cousin of Chris’ grandfather, and Cajun fiddler Dennis McGee recorded tunes that helped lay the foundation for Cajun music and zydeco.

Chris, his brother Sean and their band, Double Clutchin’, were leaders in a groundbreaking zydeco beat that caught fire in the 1990s. Sean remains active with his band, Zydekool.

Chris refuses to rest on that rich heritage. He’s already piquing interest in his next CDs.

With exciting projects ahead, Ardoin will have a high “Zydeko Fever” for some time to come.

Chris Ardoin and his heavy-on-the-R&B zydeco have put him at the top of the game for well over a decade. But a local TV appearance a few years ago made Ardoin consider a return to his roots as a third generation Creole recording artist.

“They wanted me to bring my accordion and play a few tunes,” said Ardoin. “When I got there, I noticed I really couldn’t play a lot of my songs. So many of my songs were lead by the keyboards.

“I found myself playing a lot of Boozoo (Chavis) and my grandfather’s songs. I was like, ‘Dude, I got to do something. This is not cool.’

“I’m here trying to promote something and I’m having to play standard tunes by other artists instead of playing my own.”

Ardoin returns to a more rootsy sound with his new CD, “Back Home,” published on Maison de Soul Records in Ville Platte. The 17 new tunes still boast lots of contemporary flavor. But the accordion, long the driving force in zydeco, is front and center.

Ironically, the downhome sound of “Back Home” has the world paying attention. As of last week, the CD was No. 1 on the iTunes Best-Selling World music chart and No. 1 on Amazon’s Best-Selling Blues chart.

“Down Home” was No. 20 on Google Play’s Top Albums chart, which includes all genres of music. That ranking put Ardoin in the company of Bruno Mars, Jason Aldean and other mainstream stars.

These rankings are rare feats for zydeco music and pleasant surprises for Ardoin.

“That is amazing to me,” said Ardoin. “For the culture, it’s a big thing to get that kind of response on an album.

“The album started getting a lot of buzz when I dropped the album cover. The picture was taken in front of an old house on the back of my property. I think it caught a lot of people’s attention.

“I put a waltz on this album. When people heard it, it was different and something they hadn’t heard since the early 2000s. I think the music got a little too close to R&B.”

Chris’ CD continues a historic legacy of Ardoins recording and performing zydeco and its predecessor, Creole music. In the 1920 and ’30s, Amede’ Ardoin, a cousin of Chris’ grandfather, and Cajun fiddler Dennis McGee, recorded tunes that helped lay the foundation of Cajun and zydeco songs that followed.

Chris, his brother Sean and their Double Clutchin’ band were leaders in the groundbreaking contemporary style of the 1990s. Chris, who turns 33 in April, looks back at his career and family legacy with fond memories.

“I’ve done so much,” said Ardoin, who started playing at the age of 4. “Not to say that I didn’t appreciate it, but I didn’t realize the magnitude of what I was a part of. Back then, I was just playing for fun.

“But now, I realize I played Carnegie Hall. I was 9. I’ve traveled the world, been in movies, just a lot of stuff. It took me a long time to get the recognition locally, which is something we strive for around here.”

Later this year, Ardoin is looking to release a tribute CD to zydeco’s pioneers.

He’s enjoying having a foot in the zydeco’s contemporary world and another going “Back Home” to the roots.

“Zydeco is at an all-time high. People are getting into it left and right.

“I also feel we kind of lost the zydeco in zydeco. We need to get people to realize where it came from.”

In 2009, the 28-year-old begat Alter Ego, a radical update to what it sounds like to be a modern-day Creole.

The accordion and scrubboard are still there. But gone are zydeco’s familiar rhythmic landmarks and lyric antiquities; no paper in the shoe, no toot toots, no snap beans sans salt.

This is NuStep Zydeko: wise to saggin’ jeans, Facebook, and Hennessy; all heavily dipped in R&B beats and sly rhymes for an extra-smooth coating. “Good, Good,” “Make U Surrender,” or the sex-u-up “Rockin’ the Stiletto” may be light-years removed from the primal coarseness of, say, “Brunette’s Waltz,” originally waxed in ’34 by his famously famous ancient cousin, Amede Ardoin.

And the music’s nu form still remains a dance floor cathartic. Importantly, such a major Creole evolution is securely in the best of hands: those of an Ardoin, zydeco’s first family.