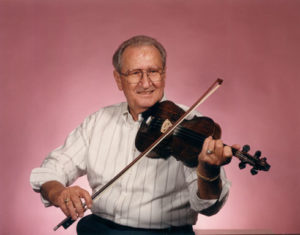 Dewey Balfa was born in 1927 in what is called Bayou Grand Louis, a rural area near Mamou, Louisiana. His father, Charles, was a sharecropper in Evangeline Parish and a fourth-generation fiddler who instilled a great love of Cajun music in his children.

Although Balfa chose the fiddle as his instrument, his four brothers were encouraged to participate by playing any instrument they wanted. Young Dewey began learning songs from his father when he was about 13, but it was more difficult than he had expected. About his early fiddling days, he remembered, “My mama would say, ‘It sounds like when you catch a cat by the tail. Get out of the house.’ So I had to go in the barn.”

Balfa said that, in addition to his father, several other musicians influenced him when he was young: J.B. Fusiler, Leo Soileau, Harry Choates, and even Bob Wills. On the weekends and for family gatherings, Dewey joined with his brothers to form a group they called The Balfa Brothers. During the 1940s, the band became very popular in the dance halls of southwestern Louisiana, and in the 1950s and ’60s, its music continued to evolve.

In 1964, Balfa was invited to the Newport Folk Festival, where he played guitar as a last-minute replacement with Cajun accordionists Gladius Thibodeaux and Louis “Vinesse” Lejeune. Three years later, The Balfa Brothers band performed at the festival. These performances, Balfa said, had a profound effect upon him and inspired him to devote himself to the preservation of Cajun music. “We were brought up and told that this kind of music’s sort of a bastard music,” Balfa said. “And you play it for 17,000 people that gives you a standing ovation. It made me realize that no one is better, no music is better than the other music, but then that music is the universal language. It’s who you are. I would like to think that I set the fire to the renaissance of Cajun music.”

The Balfa Brothers played together until 1978, when Dewey’s brothers Will and Rodney were killed in an automobile accident. Balfa continued to play, and Rodney Balfa’s son Tony joined the group. In later years, Balfa also included his daughters in his band. ~excerpt from NEA National Heritage Fellowships

When people in the “business” refers to roots music, often forgotten are some of the wonderful styles fostered and developed in North America. One such tradition is Cajun music. Once of the foremost recent stylists of this music was Nathan Abshire. An accordionist’s accordionist, he picked up the squeezebox at age 6 and never put it down. He played the music the way it was meant to be played – with heart and passion. Fortunately, when he died in 1981, Abshire left a legacy of tremendous music, much of which is found on this “best of” cd. From the jubilant cry that kicks off “Pine Grove Blues” to the “last dance” feel of “Partie A Grand Basile“, Abshire guides us through an hour of joyful and spirited celebration. Led by his accordion, backed by the rhythms of the Balfa Brothers and punctuated by emotional if occasionally piercing vocals, this collection is a moving tribute to a culture that has struggled for years and, thankfully, persevered.

Another carrier of the Cajun cultural torch is Dewey Balfa, the fiddler from the old Balfa Brothers band. On his own since the deaths of his siblings Rodney and Will in 1979, Dewey has continued in his role as a Cajun musical ambassador ever since. Unlike Abshire’s music, Balfa’s style is fiddle-driven with the accordion more in the background. The fiddle is a versatile instrument, and in the master’s hands it shows all of its moods, from jubilant to mournful and everything in between. The 21 cuts are mostly instrumentals. This, however in no way diminishes the impact of the music. With the help of his son Tony on guitar, daughter Christine on triangle, father-son fiddle combination Tracy and Peter Schwarz, young accordionist Robert Jardell and others, the elder Balfa crafts a finely honed collection of Southern songs that are comfortable to dance to or to enjoy relaxing in your favorite chair.