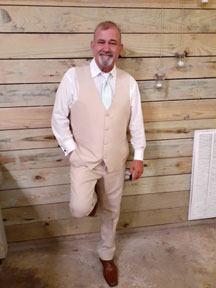 “I’ve been a musician since the age of 12. At the age of 14 I had a band. I played piano and sang. My little brother, Ricky Dugas played guitar, Brad Guilbeau played drums and Michael Meche played bass. We were the Acadiana Rascals. We were All 12-14 years old. We played in local bars and many parties. People loved the fact that we were so young and playing Swamp Pop music. We played for about 6 years, then we all got married eventually. I played with many other bands and sat in with Tommy McLain, Johnnie Allan, Johnny Sonnier, Bayou Country Band, Southern Drifters ,Don Rich, Perry James, Keith Mire, and many more. Back in the 80’s I recorded “Burning Again” and “Let Me Give My Heart To You.” These still play today on KBON. I just love Swamp Pop music, it’s in my blood. My friends and family wanted me to do something with my music, so I decided to go for it. Hope you enjoy listening to it as much as I enjoy playing it. I now own a studio, along with David Duhon and we love being in there doing what we love to do. I hope to keep this going for a long time.” ~Junior Dugas

There is not a lot of new swamp pop material written these days, but whenever Junior Dugas writes a song, he gathers up the guys and cuts it at his friend David Duhon’s studio. Yet, the catalyst for Dugas’ second full-length release was when a friend dropped off a piano in his carport. There, seated at the 88s outdoors, Dugas struck a C chord and soulfully sang, “Give me your loving.” The tenor then instinctively hit an F chord and followed it up with “I need it bad,” and bam, a new song was being birthed, the pulsating, triplet-fueled “I’ll Be Your Man.”

Though the baritone sax-resonating title track may be Dugas’ hot number at the moment, his other three originals, “The Biggest Hurt,” “It’s Her I’m Thinking Of,” and “I Feel the Pain,” could easily have their day in the sun. From a classic swamp pop perspective, they’re that good, not retreads of previously released material but enough to stand on their own merit. Dugas’ sincerity as a vocalist draws you into whatever amorous situation the protagonist may be experiencing.

Also, among the new tunes is “That’s What’s Happening Here,” written by Dugas’ talented nephew Damon Troy, who plays piano on these tracks. Jin Records honcho Floyd Soileau suggested Dugas also record Travis Matte’s 2016 runaway hit “He Don’t Know You Like I Do,” which is only a natural fit for swamp pop, given the genre’s propensity for horns.

The remaining material is battle-tested South Louisiana favorites, like Chuck Willis’ “What Am I Living For” and Lil’ Bob’s “I Got Loaded.” “Fannie Mae” is the most rollicking of this cover lot with Wayne Foreman’s dreamy guitar solo and Sid Janice’s swinging sax parts. With Dugas’ songwriting and adept band, the sunset of swamp pop will remain far beyond the horizon.

Veteran swamp pop sideman Junior Dugas recorded these dozen tracks as something intended only for friends and family. That is, until swamp pop legends Tommy McLain, Warren Storm and Johnnie Allan urged him to put it out.  His unexpected debut reveals a deep affinity for classic swamp pop, with bouncy beats and rolling horns, while breathing new life into such chestnuts as Guitar Gable’s “Irene” and Tommy McLain’s “I’ll Change My Style.”

And speaking of McLain, he certainly has a presence here. Not only did Dugas thump the bass for McLain for a spell, he also pays homage to him with “Tribute to Tommy McLain,” an original that strings together lyrics from 27 of his songs. Dugas goes further by being the first to record McLain’s “We Have a Party Here,” which previously was only a live show staple.

For a debut record, Dugas sure comes up with some dandies, like spinning the crossover standard “Release Me” with a jitterbug tempo. Gene Autry’s WWII hit “At Mail Call Today” is given royal swamp pop treatment. There’s even a song attributed to Aldus Roger, “Be Careful You’re Breaking My Heart,” which fuses trad dancehall Cajun with swamp pop keyboards.

Of Dugas’ three originals, the title track is indeed the deepest—a sincere profession of love that conceivably could become a regional wedding day staple. With this, the horse has been let out of the barn and it’ll be interesting to see where it trots next.